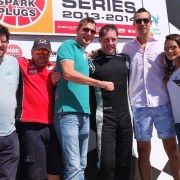 Last weekend saw the Zettanet Racing Team (ZRT) trio (Jonathan Mullan/Theo Souris and Mark Streifler) competing again in the 4th round of the UAE Touring Car Championship at the Dubai Autodrome. A horrendous start to the weekend (Accident en-route to the track) resulted in the team missing practice and qualifying only just making it to the start of the first race with 15-minutes to spare. A start from the back of the grid on cold tyres resulted in a few slippery laps and a lot of close racing but once the car warmed up and nerves were settled the team started to make their way through the field passing Honda, Renault and BMW’s to eventually take the race win.

We had a great race against Alex Annivas who is always super competitive and really pushed us hard” said Jonathan. “It’s always tough to beat Alex and when we do occasionally it’s a great to see the sportsmanship of the Greek smile and pat on the back to say well done.

After race 1 feedback was that the handling was suffering understeer (An excuse Mr. Frazer Martin didn’t seem to want to accept!) as all drivers were given an informative tutorial on track limits post race 1. The rear spoiler was adjusted and tyre pressures reduced for Race 2 and the handling was transformed back to expectations. Race 2 starting position was pole and the 1st place result was repeated lapping consistent times within 0.5-seconds lap-on-lap with the aid of feedback from Ian Rodgers on pit wall. The team are now focusing on round 5 which poses the biggest challenge of the season with the hot favourite Rupesh Channake returning to fight for the Championship.

Good day at the office for the Zettanet boys

ZRT would like to thank Deutches Auto for race preparation and Lap 57 for track support. Special thanks is due to fellow racer Spencer Vanderpal for coming to the rescue with a spare helmet given that the unfortunate accident of the morning resulted in both Jonathans’ helmets being damaged in the trunk of the car.
The 5th round is on February 14th at the annual Dubai motorsport festival. One not to miss! Join and support the team for a fun day out.
Creative photos thanks to Circuit Pro Digital and Waiki.