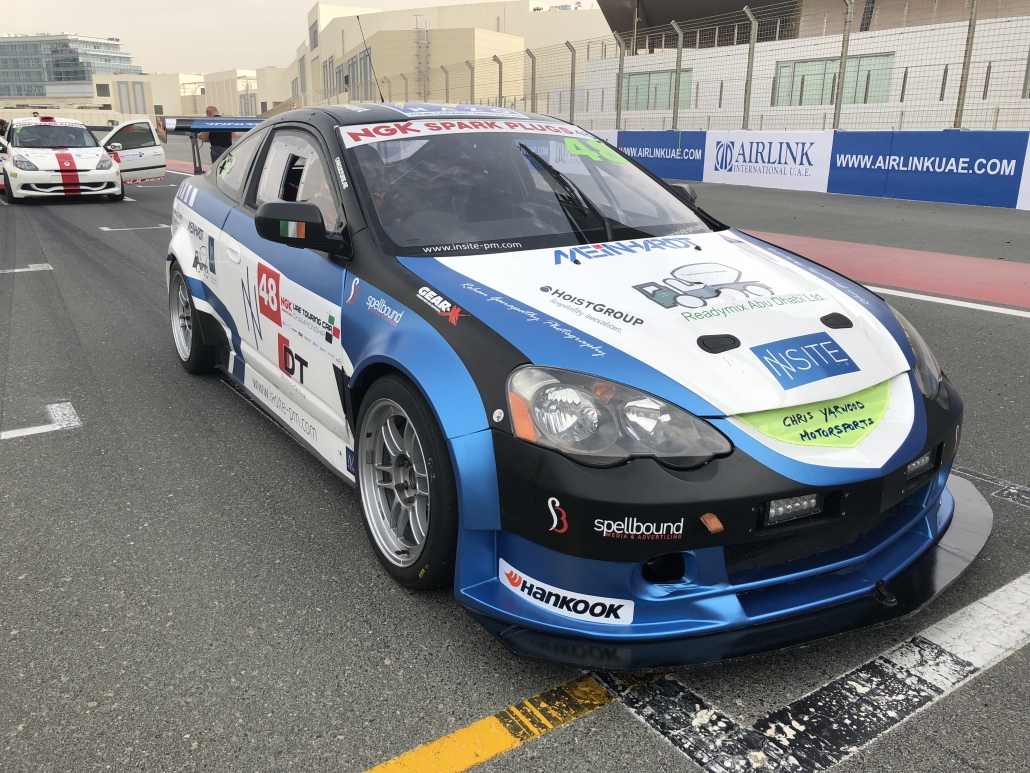 After the uneventful opener of the season at Yas Marina whereby ZRTmotorsport (ZRT) suffered a double DNS (Did Not Start) with zero championship points due to the failure of the new clutch, all eyes were focused on the first race of the season (UAETCC rounds 3&4) at Dubai Autodrome. 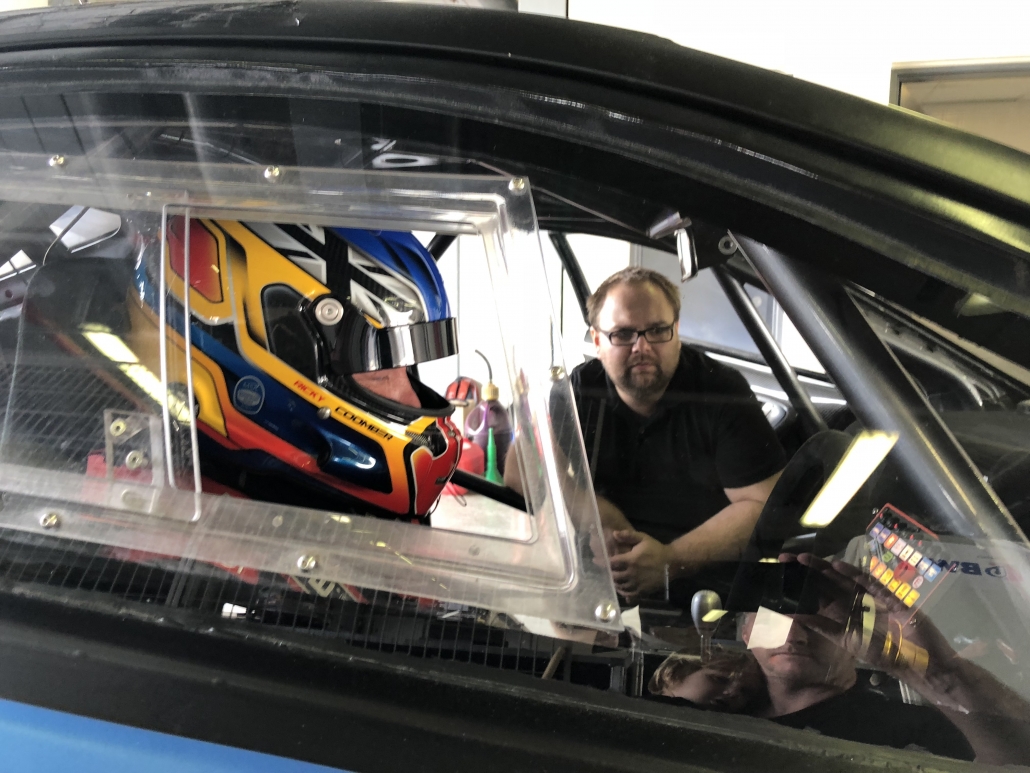 ZRT were back but with a twist; with had a new driver at the wheel; Ricky Coomber of RKC/TGM (Honda) UK who are regulars in the Creventic 24Hr series. 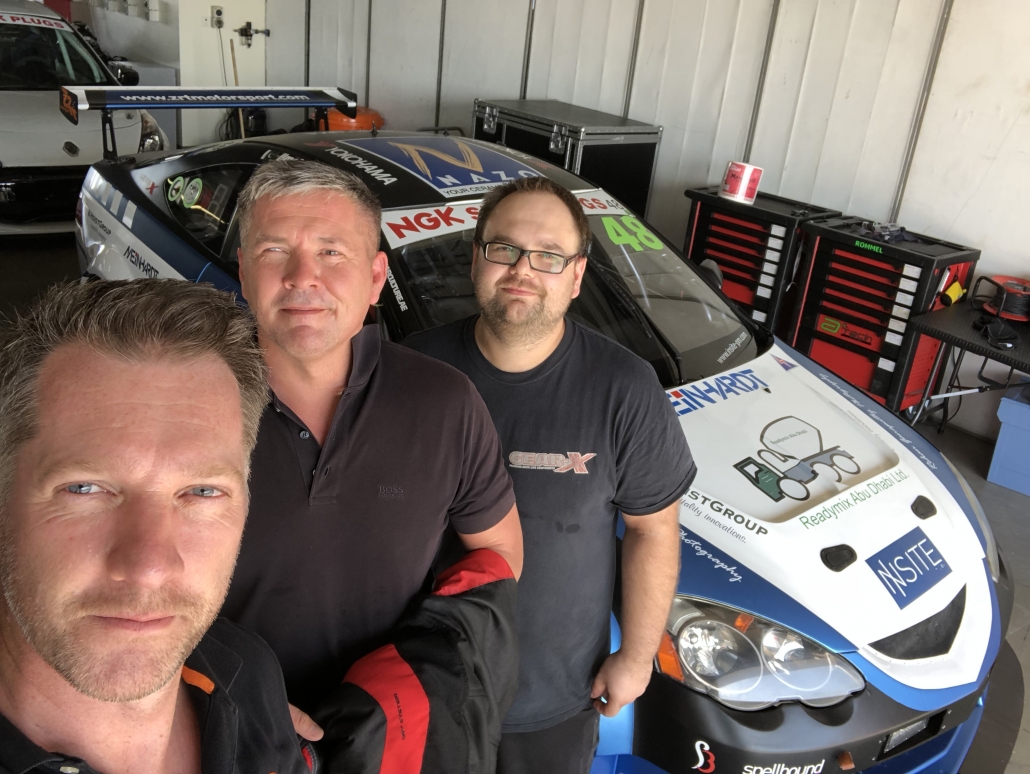 Ricky, Jonathan and Sander attended the Thursday late afternoon test day and Ricky was finding his way with the new car, settings and dusty conditions. 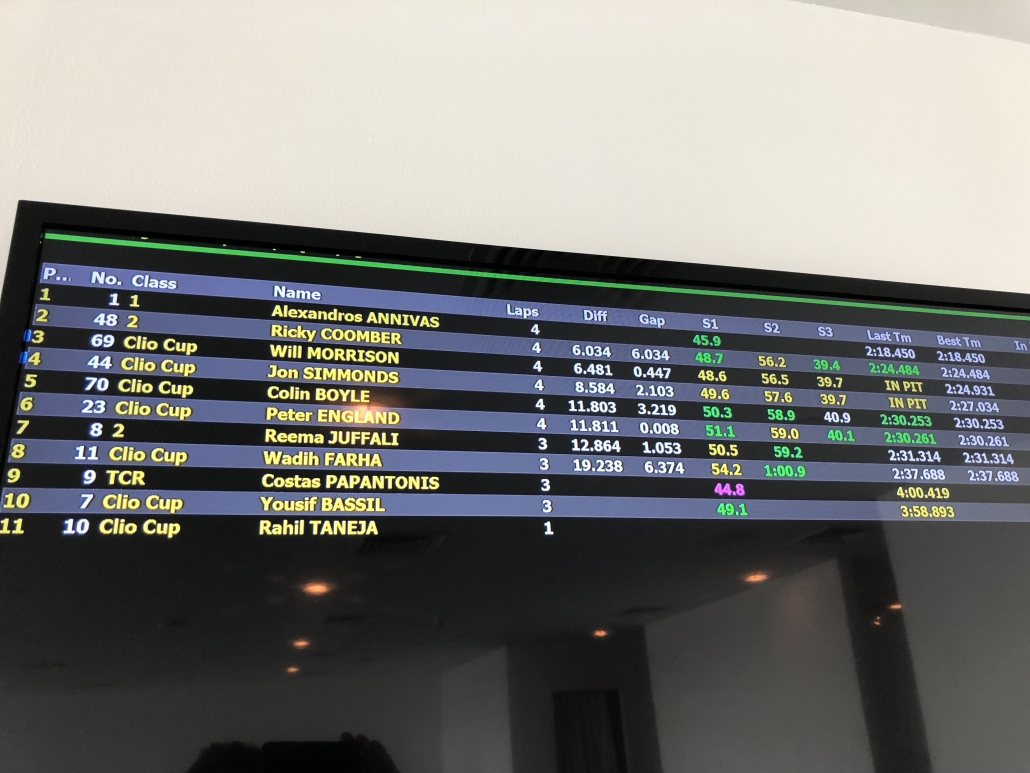 From the outset he clocked a 2:30s and after a quick pit-stop and tyre pressure adjustment dropped to 2:27s which was aligned to anyone else testing in Class 2 / Clio Cup. Before the end of the session Ricky continued to improve and eventually managed a 2:25.7s . At this point the team conferred and considering that Ricky was already acquainted with the track (GP circuit layout) and had adjusted to the DC5 Type R quickly, it was decided to save the tyres and skip the second session in favour for a fresh race day start on the Friday.

Race 1: Ricky had a reasonable start but Wil Morrison (Current Clio Cup Champion) managed to get his nose in front heading into Turn 2. Jonathan had briefed Ricky that there was a high probability of this happening prior to the race on the basis that; Wil would likely get a good start running a sequential and the Clios are better on cold tyres than the Honda. Ricky showed composure and slotted in behind although lost some time in the first sector (National corners). We had noticed in qualy that Ricky was taking +1-sec out of the quickest of the other competitors in sector 3 alone so we waited calmly too see how the lap would transpire. By Turn 16 Ricky had placed himself perfectly to get a run up behind Wils’ Clio and use the drag (DRS?!)  to pull out and take the lead on the start-finish straight heading into Lap 2. Over the course of the race, Ricky continued to stretch the lead and came home P1 in class and 3rd overall. A solid result for the team and a fastest lap of 2:24.5s. The team were most impressed by the consistency of the lap times. 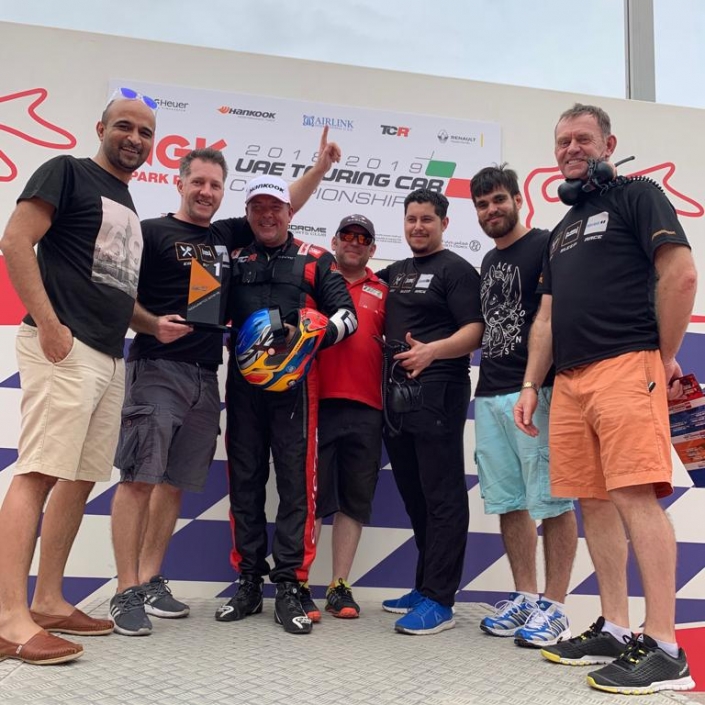 Meanwhile Ollie got some hot laps in…. 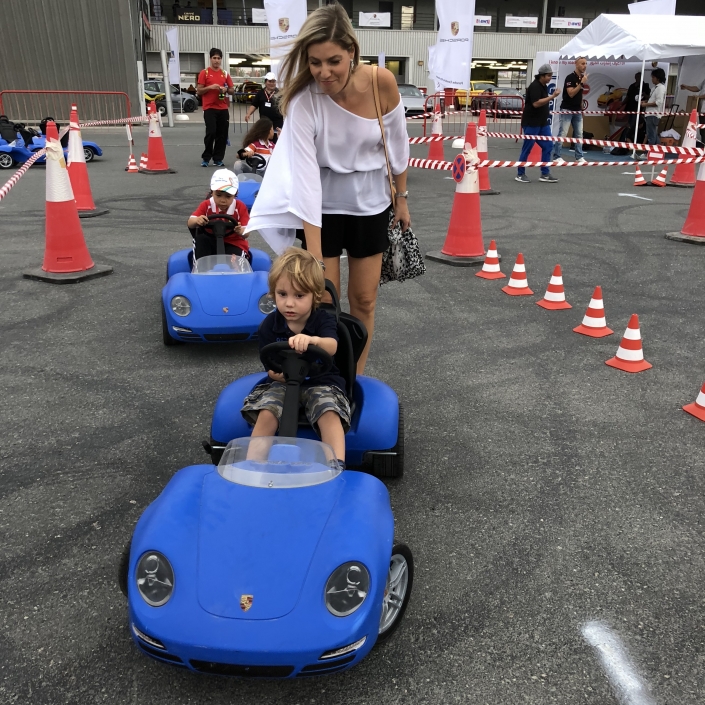 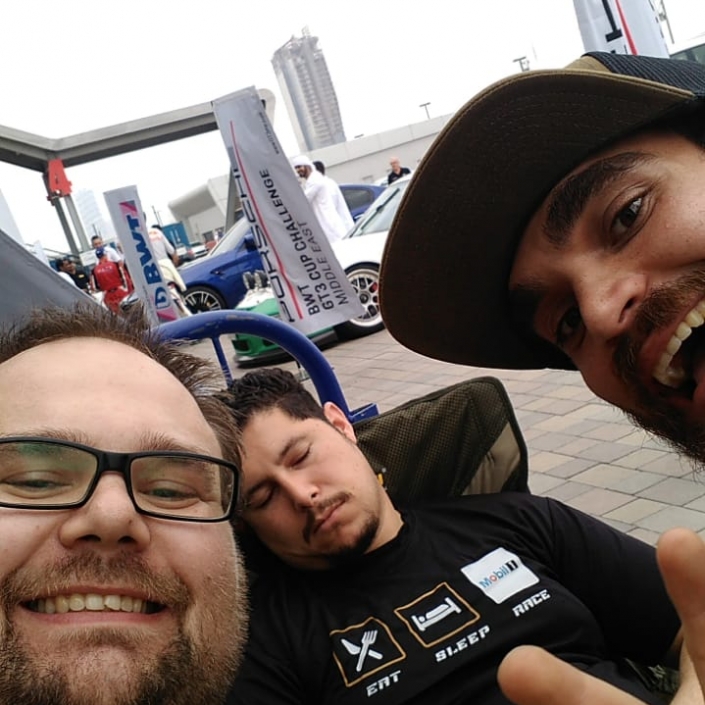 Race 2: Was a night-time race starting at 6:00pm. Anyone who has driven the GP circuit at Dubai Autodrome will be well aware that pretty much the only part of the circuit with lights is the Start/Finish straight. Now in a 24Hrs race when you have 99 other cars on track this helps to light the way but with a UAETCC grid it can be a leap of faith into the darkness whereby the drivers really do have to rely on their knowledge of the track…. and brave pills!  With the new regulations the top 6 cars started in reverse except for the Class 1 cars hence Ricky started 8th on the Grid. There was a spin in Turn 1 by a Clio driver which sent everyone in all directions like the red arrows but thankfully all cars made it through intact and so the race began. Ricky systematically picked off all 5 of the Clio Cup cars to assert ZRT as clear class 2 winners with a best lap time of 2:25.3 with Ms. Reema Al Juffali (of Dragon Racing) scoring an impressive runner up spot in both races. 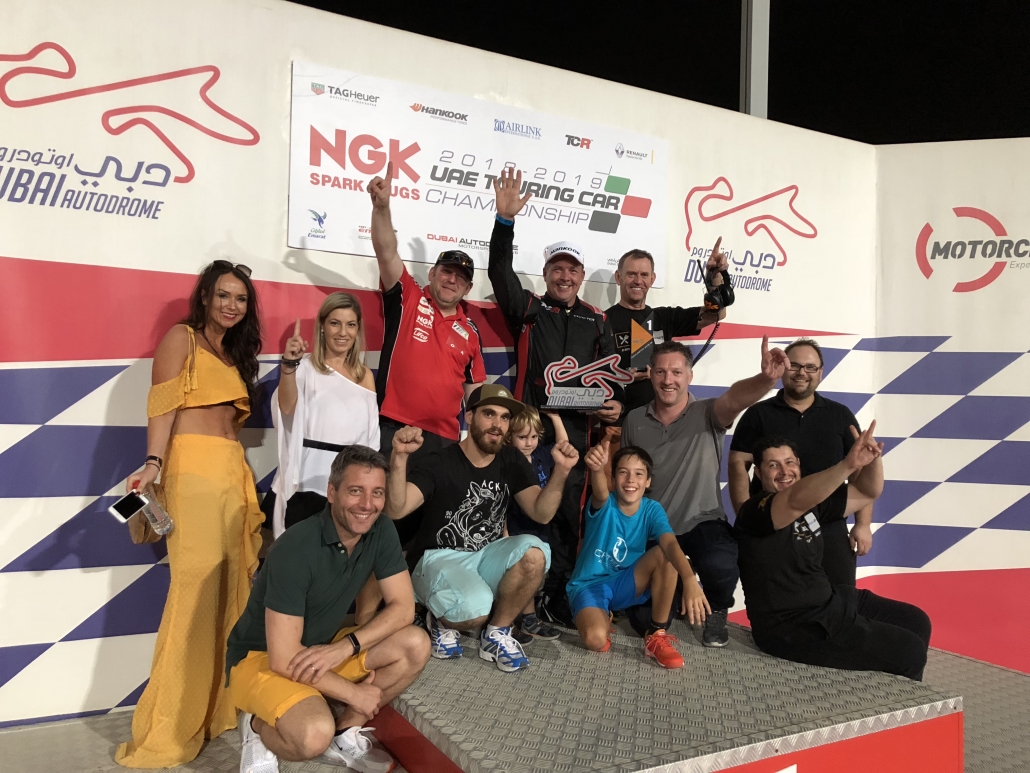 ZRT took top step in both races and Ricky was awarded the Airlink international (UAE) Driver of the day award which we are very proud of and thankful for. 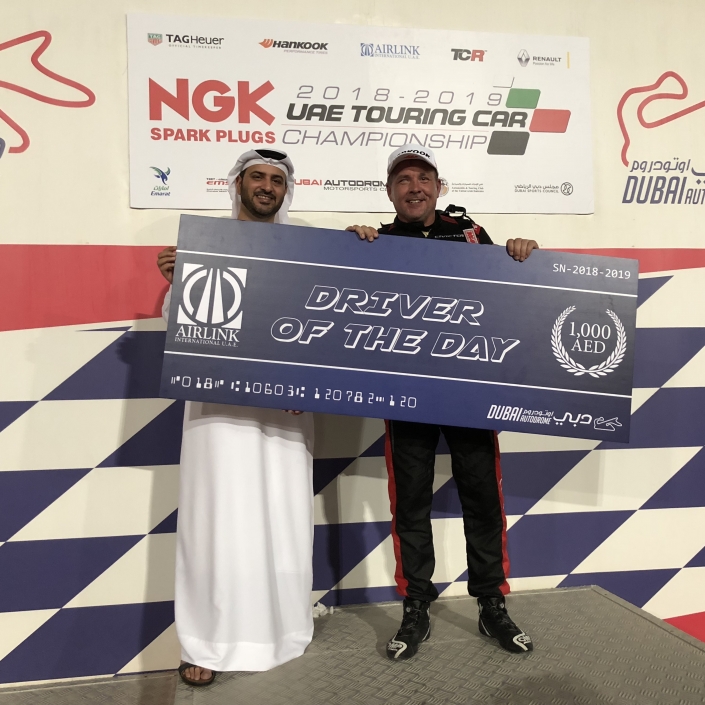 The team retired to Jason & Christina’s (Thanks guys) for a ROCCEBOX home made  pizza party and look forward to Rounds 5&6 on December 7th 2018. 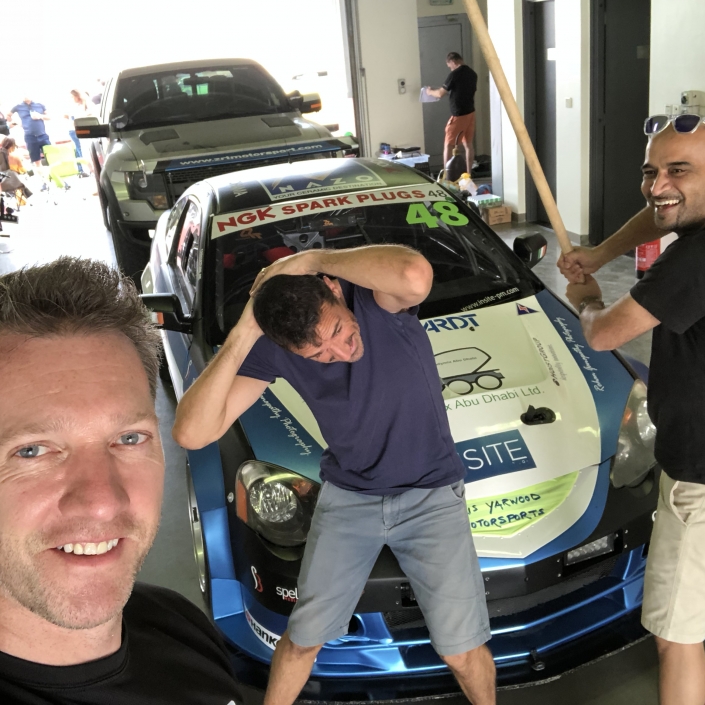 ZRT encourage everyone to come and enjoy the day’s racing. Dubai Autodrome have really a superb offering with a family focus so take your kids along and start to inspire the next generation of petrolheads or electricheads as it may transpire! We welcome any kids who want a photo in our car and provide helmets and drivers pics. The UAETCC echoes a spirit of competition without complication. We are all in it to win it but look out for each other…. Thanks Dubai Autodrome and all our fellow competitors ☺