The world governing body for motorsport FEDERATION INTERNATIONALE DE L’AUTOMOBILE (FIA) have defined the regulations and standards for seat belts / harness that must be used when competing. The standards are defined under: Standard 8853/98, FIA SAFETY HARNESSES STANDARD

The harness must also have 2 separate labels sown on stating the standard the harness complies with and the manufacturing date (harness has a maximum 5 year life before it has to be replaced).

The standards define the permissible belt widths and load capacity, these are detailed below:

There are 3 types of racing harness, these being:

The 3 sets of belts each do a specific job, these are described below:

In order for the harness to do its job properly, it is essential that the harness is installed as per the regulations / manufacturers requirements. This is detailed in the following diagram.

The roll cage has 1 or 2 bars installed specifically for the shoulder belts to be looped around. The lap and crotch belts are clipped into specific harness bolts that are installed in the cars floor pan with load spreader plates (as shown below): 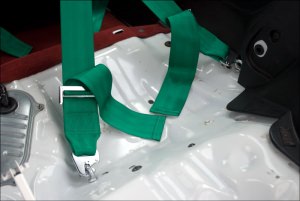 The teams original harness would have expired prior to the 2015 Dubai 24hr event. So the team paid a visit Motorsport Wheels (authorised provider of Luke Harnesses) owned and run by the vastly knowledgeable and ever helpful Jon Simmonds. He soon sorted out the team with a new 6 six point Luke harness in red. Why red and not say black or blue? Two reasons that may not be apparent if you only race in day time sprint races, these being:

And here is a picture of the harness installed in the car (the orange cord is elastic cord to help keep the belts away from the seat during driver changes). 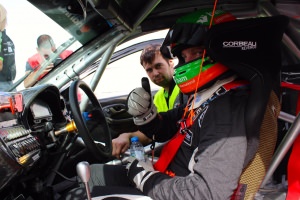 The team thanks Jon and Motorsport Wheels for their service and hope they never have to test the quality of the harness.