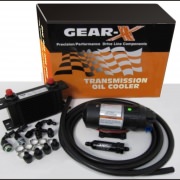 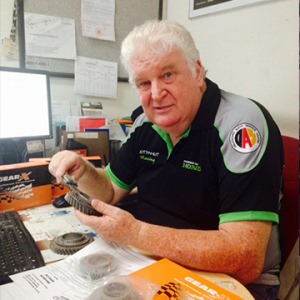 An often and true quote used by the teams Technical guru Jeff “Kiwi” Owen is “One of the advantages of surviving a good number of years in the Motor Sports game is… You learn a lot of good and often costly lessons.”

In any Race car, the Gear Box is never treated with the same respect and adulation as the Engine, where mega bucks are spent looking for that last couple of Horse Power or Ft lbs. of torque. And no expense is spared to keep it alive. 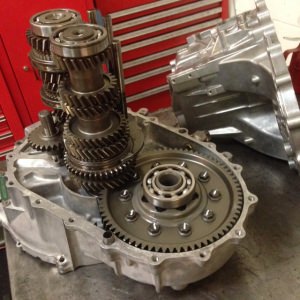 I believe that as long as it has oil in it… there are only three things that can shorten the life of a Gear Box- Poor assembly, Shock load and Heat.

All too often guys complain that after only a few sprint races or less than a season, or during a long distance event, gear shifts became difficult, or gears start crunching during up or downshifts, or worse yet, catastrophic failure! Often the problem is caused –Not by the lack of skill by the guy who built the gear box…usually the first blamed for any failure.

No, it can most likely be attributed to Heat! The same heat and damage that will be attended too immediately and with much consternation if occurring in the engine, is often ignored when it occurs in the Gear Box.

The Gear box gets a change of fluid now and again and is generally never thought of as a potential failing component, until it gives up!

These frustrating and often costly experiences early in my racing career prompted me to really put some research into transmission oil cooling and with some fairly simple testing we found some surprising results.

Just as cool oil is the life blood of a high performance engine, so too is good cool Gear Oil. During our extensive testing in our own team cars we often recorded Gearbox temperatures in excess of 300º (F). In situations like that if you’re not running synthetic gear oil then your gearbox will soon be toast, expensive toast. 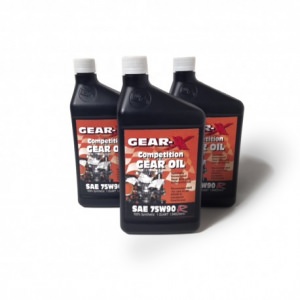 Some of the heat build-up is caused by the ever popular use of under trays and Air dams and Splitters which cut down the circulation of cooling air around the casing which is the only form of dissipating the heat under normal circumstances. Too often these incredibly high racing transmission temperatures go unnoticed and failing synchros, worn out sliders and gears are accepted as normal.

It need not be that way. The racing life of your gear box can be extended indefinitely by installing a GEAR-X Transmission Oil Cooler System. This was one of the first Items we provided the ZRT Team in their build up for the 2015 Dubai 24Hrs Event. 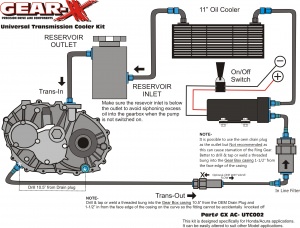 This kit comes with a top of the line transmission/differential oil cooler pump. Lightweight, self-priming that may be mounted in any position up to several feet away from the source of oil. 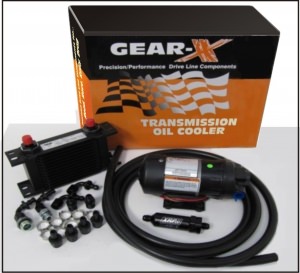 Also included is your choice of highly efficient (11”x3”) (11”x 5.5”) (11”x8.5”) or (11”x11”) Cooler and a 10 micron inline filter, all the Dash-8 Pushlok fittings, Electric On/Off Switch, 10ft of Pushlok high pressure hose and clamps are provided along with comprehensive instructions on fitting, wiring and plumbing the system to your Race car.