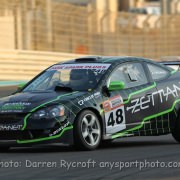 So after a hiatus for the summer the UAE Touring Car Championship returned to Yas Marina circuit for race day 1 of the 2013-14 season.
The off-season saw last year’s car stripped back to the bare shell for a complete rebuild. A much needed suspension overhaul was also carried out in an attempt to eliminate some of the cars evil handling traits of last season. Another very obvious change was the race livery. The striking black and green was the work of renowned race car graphic designer Andy Blackmore, the car cannot be missed on the circuits now, that’s for sure…

Thursday at the circuit was used to get Jonathan back in the grove and to give the car a real good shake down. Throughout the day a number of differing setups were tried as were a few different tire pressures, hopefully to find the optimum set up for the race day. With the new suspension, the handling of the car had improved dramatically. Unfortunately, the same could not be said for the engine performance. A definite lack of power had everyone baffled and much scratching of heads failed to find the reason why!

With new tires fitted ready for the Friday morning warm-up, the car given a quick clean, garage tidied up and readied for race day.
Friday morning dawned cool but dry. The car was checked over with no apparent cause for the distinct lack of power being identified. The warm-up was used to put the tires through a heat cycle as discussed with Chris Keogh of Dunlop. Sadly the V-Tech power was still missing with the team carrying out further checks in an attempt to find the reason and hopefully rectify the problem before race one.

Qualifying came and went with the engine still not running on full power. The census being that the V-Tech was not kicking in under load, frustratingly, with the car on axle stands it was working fine! Fuel pumps were re-configured, all engine sensors changed but to no avail, the power loss was still there…
Both races passed without incident with the exception of a helmet full of frustration (Shouting at the car didn’t seem to help either!) Given the real lack of grunt which was expected from the Hondas engine, finishing was the primary task, the net result being a 6th and 4th place finishes respectively.

Although disappointed with the results, the team came away happy that the handling issues from last season had been significantly improved on. The car is currently undergoing simulation checks on the Dyno tester to isolate and fix the fault before the next round in November at the Dubai Autodrome.

Despite the frustrations of the weekend Jonathan would like to thank the great efforts of Ian Rogers for managing the weekend in full, Spencer Vanderpal & ‘SVDP Racing team’ for their thoughts and ideas how to resolve the glitches and Heiki Eelma of ‘Deutches Auto’ who has highlighted a few improvements that can be made to help with troubleshooting and move forward. Thanks also to Lap 57 for trying their best on the day to resolve the issue and finally the Dubai Autodrome Team including Richard/Richa/Emi/Phil and Terry for their sympathy and humor….
As for the competition, well done, great racing but watch out next time, Jonathan & the Zettanet Team will be out to get you!

Zettanet Racing Team heading back to form…
Scroll to top