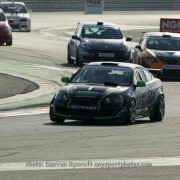 Rounds 11&12 of the UAETCC at the Dubai Autodrome last weekend saw some of the closest racing ever between the Class 2 top runners.

Zettanet Racing Team (ZRT) were back on track with a new gameplan.

In earlier rounds we just didn’t have the straight line speed of the Lap57 Honda’s” explained Theo Souris (Team Manager) and due to the regulations (Horse-power cap) our only recourse for improvement was handling and gearing. We worked closely with Deutches Auto Service (Dubai) and Gear-X (Special Projects Motorsport) in US to establish a sound basis for these improvements.

Initial feedback was that they had paid off with Jonathan taking pole position in qualifying…Things were looking good thus far!
Race 1:  Started well, briefly running in second position on account of Alex Annivas’ bold maneuvers through turns 4&5 (or the ‘Alex corners’ as they are now affectionate known due to his abilities to do what cannot be done through those high speed turns). Once the lead was re- established it was a consistent run (almost) to the finish line when on the last lap the gear selector failed and the only gear available was 4th. Jonathan nursed the car round and managed to hold onto the lead to take the win.

Race 2: Started with us again on pole, sadly the flying Greek Alex was out of contention with clutch issues on his Clio. Rupesh Channke got off to a flying start on the run down to turn one. Whilst the Zettanet boys had better speed through the corners they just couldn’t squeeze past and repeat the first race result but managed to bag 37-points on the day. All in all, not a bad days work. So its onward to Abu Dhabi – Yas Marina Circuit on the 28th March for another step forward towards the season finale which is at this stage looking like a true nail biter!

If you want to be closer to the action then pop along and join the team and the racing ,have a chat to the guys and find out what they are planning to unveil their next development to make them go even faster in the twisty sections.
ZRT would like to say special thanks to Deutches Auto Service for race preparation and race support and Jeff (KIWI) Owen of ’Special Projects Motorsport’ for encouraging us to push harder in the corners and of course, all our friends without whom we would not have a team.
PS. Congratulations go out to Simon Dennis on his double wins this weekend…

Simon Dennis – (Far right) dedicated his wins to the memory of his dear wife Margret , a fine tribute to her and a very popular winner on the day…

ZRT are now establishing plans for the next Dubai 24-Hrs so if anyone is interested to become involved in the team, chef/tea-boy/mechanic or sponsor:
Drop the team a line through the Facebook page; www.facebook.com/zettanetracing
Or by email @ [email protected]