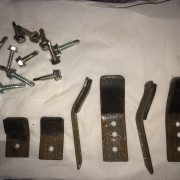 The race car is right hand drive and so with cars being left hand drive in the middle east, getting a replacement windscreen is not easy (as we know from last year). For the event the team have bought a windscreen that is made for the car, with the team under strict instructions from Jonathan to “not break it”, well is the printable version of what he said but you understand what he means.

Now what happens is the screen gets damaged / broken due to damage caused on track (stone / car part hitting the screen)? Well there wouldn’t be enough time to remove the screen and fit a new glass one (even if we had a spare right hand drive windscreen which we don’t), so as a contingency Jonathan has bought a pre-shaped plastic screen.

Luckily the team have a couple of members (Richard and Jason) who assist a local desert rally team (Ian has navigated for the team in the Saudi Baja). Richard and Jason thus have experience of plastic windscreens and how to fix them to a car.

So one after a couple of hours in his man cave, Richard has produced these lovely brackets that will hold the plastic windscreen in place and enable the team to continue racing. 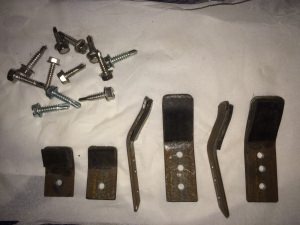 Of course it goes without saying that the team hopes that they won’t need to use these brackets…..