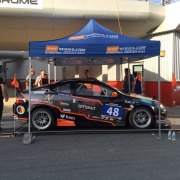 Racecars actually spend a very little amount of their time in corners; in fact, most of their time is spent accelerating and braking between them. Having a greater rearward mass helps the car do those tasks better. Generally speaking, you always want to keep the weight in a car as far back and as low as possible. Here are some of the benefits of having a rear weight bias:

The reason for these benefits is as follows:

Better braking: Having this weight in the back naturally uses all of the tires more efficiently during braking, instead of overloading the front tires which is what tends to happen in a front biased car. Needless to say, the rear brakes do more work on a car that has a greater rear weight distribution.

Better acceleration: With more weight over the rear axle, it’s obvious that there is going to be more traction. Thus, the car can put down more power without spinning the tires.

Better corner exit: For the same reason given for better acceleration. A car with a rear weight bias can put the power down sooner when coming out of a corner.

We could have fitted the fuel tank above the spare wheel well and hence push the weight further back. However, over a 2 hour stint approximately 80kg of fuel will be consumed and thus the weight balance would change significantly. Also, if the car was hit at the rear, we would risk the fuel tank getting damaged and thus putting the car out of the race.

This resulted in a front / rear balance of approximately of 66% / 34%with our old chassis.