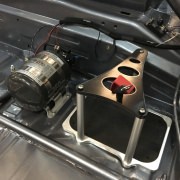 Firstly and a bit random but the team bus (24Hrs sleeping wagon) has been fitted with a new set of headlights I bought for AED 300 (£60 for those following the blog on pistonheads.co.uk) in in Al Ain. Actually our friend Kinan Dawood sourced them for us. Probably my favourite new part of the year to be fair. Transformed the look of the old girl (or at least the front of it anyway).

The inside got a spring (winter) clean and its ready to do its annual 100kms driving!

Meanwhile. When I visited the car last weekend there were a few more jobs completed.

… along with a spanking new battery holder which can be seen in the above image. Much nicer than the big ugly red box we had previously.

The accusump was positioned and new loom pretty much wired in pending final terminations to things like lights and the control panel.

The AST suspension adjustable canisters have been mounted front and rear for easy access. Below is a pic of the rears.

All of the engine connectors are in place on the bulkhead including engine loom plug (from wireworx USA), battery positive and oil lines from the previously photographed accusump.

Last up is a pic of the dash mounted in place. Still not sure what the two holes are for but all will be revealed soon.

Meanwhile the doors and hatch are all in the paint shop to get tidied up and refreshed in a nice crisp white. I also visited Leadright Dubai earlier today to finalise the shade of orange for the colour scheme. Again something a little different coming your way soon.