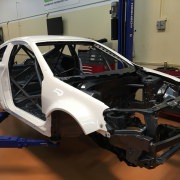 Ok so its October instead of September but the good news is that things have moved on and we now have a really smart looking shell (painted under, internally and externally). The bodyshop faced three main issues:

– Front wings needed some modifications at the top where they meet the windscreen posts (actually the windscreen posts were modified as opposed to the wings) with added metal since they both didnt marry up cleanly.
– Doors were modified to fit.
– The shot-blasting caused a lot of damage particulary to the roof and rear 3/4 panels. There was a lot of hammering required to straightening those three sections of the car as opposed to opting for filler.

A-tech insisted in their trademark metallic grey for internals/under/inside the wheel arches/bonnet etc. And a nice clean white for the exterior. Our final livery will be revealed in due course but this year you can expect to see more white as the main part of the scheme.

First up is under the bonnet:

Below is the roll cage which you can see is painted as nicely as the exterior:

Internally we need to start some fit-out

And the last few pics show the exterior of the shell: Doors/bonnet/hatch and bumpers will all be fitted at the end of the build. The other panels will now all be masked off to avoid any damage while the rebuild continues:

So, with some luck in the coming weeks we shall start to see the shell transforming into a #racecar!

More updates as the build progresses…