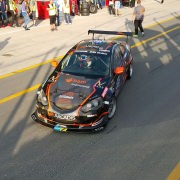 The teams set-up for the event consisted of Richard “toolman” Bailey and his team of trusty mechanics (Heiki, Sander (Sander would be looking at the data recorded) and Jun Mago (Jun changed wheels). Jason Lyness was trusted in monitoring tyre pressures, temperatures and usage. He used the sessions to refine the cold tyre pressures as this was key to tyre longevity. Jason was ably assisted by Phil “the prince” Craven (Phil was interviewed by Nigerian tv during the event). 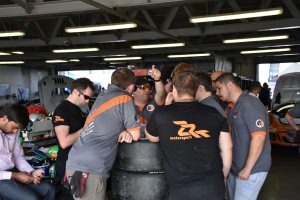 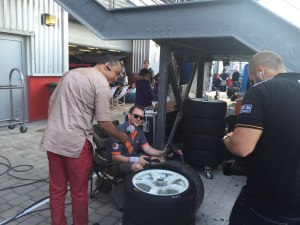 Fuel consumption monitoring duties was carried out by Luke Stratford and Huw Williams (Huw is our youngest team member). The idea being for the car to only have the volume of fuel it needed for each driver stint to minimise weight. 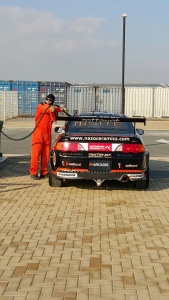 The drivers sector and lap times were recorded by Ian from the pit wall. Ian also was in communication with the drivers by the car-to-pits radio and with Richard for pit stop planning / co-ordination. Ian would be assisted by Richard Timmins during the race. 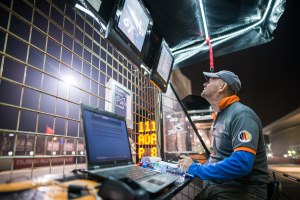 Hospitality was under the care of Theo “shroom” Souris (most meals ended up having mushrooms in them). 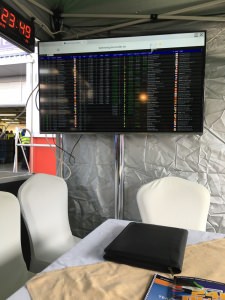 The final piece in the jigsaw was Jeff “uncle” Owen (Jeff is the senior member of the team), who offers his vast racing knowledge to the team.

With 100 cars entered clear track space was always going to be a premium. So a decision was made to give the drivers longer driving sessions. Graham drove the 1st practice session and a quick post sessions debrief revealed the car handled and stopped well, but the brake pedal was going a little soft or “spongy” in racing driver speak. 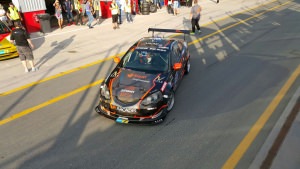 Richard and the mechanics performed the planned maintenance tasks and investigated the cause of the “spongy” break pedal (weeping caliper and brake line union). 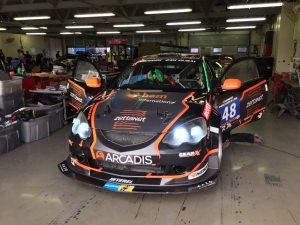 A new rule for 2016 was that the driver who set the fastest lap in qualifying would start the race. Graham volunteered to qualify the car and thus start the race. In order to try and give Graham some clear track, the team sent Graham out 5-minutes after the session started so that when he was ready to start his flying laps, other cars would be in the pits having their tyre pressures checked (ZRT didn’t need to do this as Jason had the tyre pressures well and truly sorted). With Ian monitoring the other cars on track via the GPS system, Ian was able to give Graham the good news that he would be getting 2 clear laps. On Grahams last flying lap he was over 0.5s up on his previous sector time when had to abort the lap as he couldn’t engage 5th gear. (A cause for worry!)

Jeff’s immediate comment was to look at the solenoid valve and to nobodies surprise, he was right (this is the very reason why the team have Jeff as part of the team). The problem was soon fixed and the car prepared for night practice.

Night practice was completed without any major dramas except for the “spongy” brakes and 5th gear engagement issues appearing again. The drivers were however able to complete their mandatory laps with Tim commentating “this is nuts, cars are passing me left, right and centre”. With the track sessions being completed the drivers were sent home to get as much rest as possible. 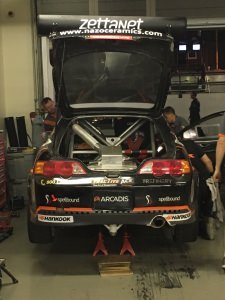 The mechanics on the other hand had no such luck carried out a complete spanner check on the car, changed the brake master cylinder (thank you Dragon Racing), fixed the 5th gear problem (loose wire on the solenoid) and agreed on the fuel and tyre strategy for the race.